"While it's not an original print from the engraved plate—an original sold at auction on September 15, 2020 for $30,000—it is the best print possible. We've invested in substantial reconstruction of some larger missing pieces around the edge and done some other small corrections, but have left most of the other signs of wear. Framed, it will come close to looking like an original.

"Historically these were framed without mats. If you choose to frame it without a mat, you can find 22" x 30" assembled frames online for less than $100.  Larger frames and mats are available online, too.  Either way, this is probably the most affordable option (versus custom framing at a craft store or at an independent frame store). However, if you want conservation framing, you will want to go to an independent frame shop and specify that that’s what you want." Absolutely love the Declaration of Independence historical archive print. Proudly have it hung in our family room for everyone to see and to promote our great history.

I ordered this piece for my husband, and it is perfect! The paper is thick, the print is clear.

Excellent nostalgia and exceptional print. Binns print takes me back to middle school. Love it! Have it hanging in my office.

J
Jeremy P.
When in the Course of human events 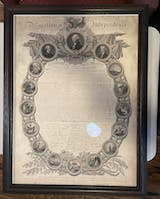