On the back, text taken from the original vellum copy that the delegates signed: "We hold these truths to be self-evident, that all men are created equal, that they are endowed by their Creator with certain unalienable Rights, that among these are Life, Liberty and the pursuit of Happiness — July 4, 1776."

Historical Background Behind the Flag

My son was recently sworn in as a junior member of the Sons of American Revolution. I bought this shirt to celebrate and also for him to wear while on a trip to Colonial Williamsburg. He received many compliments as we strolled the historic streets and he was so excited that his shirt matched the flags in front of the buildings! 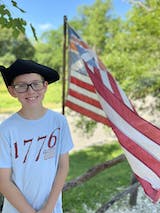 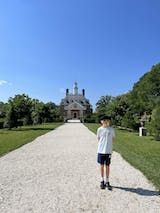