This design is also available on a crewneck shirt in antique denim, crewneck sweatshirt in charcoal, and a grey tank top.

Also in a white 100% cotton Made in USA shirt and on a polycotton shirt in light blue heather, and silver with the 1776 on the front and text from the Declaration at the back. "History Mom" Shirt — In your choice of 3 styles and colors

This is one of the best purchases ever! The shirt is so comfortable, like a favorite you’ve had for years. The saying on the back is the reason I made this purchase, it looks great on the shirt. And the customer service was amazing. 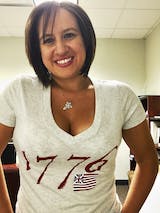