Framed Set of Revolutionary Documents: "America to her Mistaken Mother" and "Britannia to America"

Updated November 22: We only have one framed set available and four unframed.  We have no plans to print more.

The prints: Imagined correspondence between Britannia and America printed in 1778 satirizing the plea of the rejected mother (Britannia) and the reply of the rebellious daughter (America) done as rebuses. There is a detailed explanation, including a "translation" below.

These are fine art grade reproductions, printed with archival inks on 100% cotton rag, acid-free archival paper. Several of the characters in the "American to Her Mistaken Mother" rebus appear in color, while the "Britannia to America" rebus is all black and white.

Sold as a pair, the price is for the two framed prints.

The frame: The size of the frame is 11" x 14" and made from solid wood. The borders are 1.25" wide and have a black with burgundy and gold trim.

As noted above, these prints are archival grade. The frame provided here is not. It is the perfect complement to the prints and will look very nice in an office, study, or living room.  To preserve the colors, you'll want to hang it out of direct sunlight or replace the glass with glass or acrylic that provides UV protection.

Shipping: Due to the size and weight of this item, the charge for shipping is $25.00.

We've included the historical background and translations below.

This framed print will make a historic addition to your home or office. Your purchase will also help us support local history organizations across the country.

My dear Daughter I cannot behold without great pain

your headstrong backwardness to return to your Duty in not opposing

all the good I long intended for your sole Happiness & being

they have instructions to give you those things you

not to him     all the world takes notice of his two faces.

his heart repent & know that one good or ill turn merits

another. NB let not hate3 take too much hold of your heart.

I am your friend & mother.

1 or "five overwise"
2 The snake forming a circle is an ancient symbol for eternity. This symbol also suggests unity, which is the more probable translation in this context.
3 "Hate" has been suggested as the translation for 80 by several scholars, including M. Dorothy George, an expert on prints of this period. The meaning is appropriate, and other contemporary rebuses use such pictures as a hand for "and," indicating that the Cockney pronunciation was commonly used.

America to her mistaken mother.

to draw our attention from our real interests but we are

determin'd to abide by our own ways of thinking

& safely sent home again     you may trust them & admire them,

sweet as you sent him, twas cruel to send so pretty a man so many

bobbing his coat & dirtying those red heel shoes     if you are

wise follow your own advice you gave to me     take home

your ships [and] soldiers     guard well your own triflings & leave me

to my self as I am at age to know my own interests.

without your foolish advice & know that I shall always

regard you & my Brothers as relations but not as friends.

I am your greatly injured

The use of pictures to represent words appears to be the earliest form of written communication and reached a high point of sophistication with Egyptian hieroglyphics and early Chinese pictographic characters. The rebus, though it superficially resembles the pictograph, is conceptually opposite to it. In the rebus pictures that, when named, will give the sounds used to make up words are combined with letters of the alphabet or with other pictures in a puzzle text. For example, a bumblebee and the numeral 4 could be used to indicate the word "before." The picture in a rebus has nothing to do with the message but only indicates the sounds that make up words concerning other objects or ideas. These two "hieroglyphic letters" combine both methods in that, on one hand, pictures of Britannia and soldiers are used to represent these words, and, on the other hand, a picture of an eye indicates the word "I," a toe stands for the word "to," etc.

As early as 1540 the calligrapher and engraver Palatino published a verse with pictures interspersed with words. During the 17th century the French adopted the rebus as a form of amusement, and its popularity quickly spread to England, where people enjoyed thinking up ways to express their names as picture puzzles; rebuses soon began to adorn tavern signs. The American Revolution inspired many political prints, frequently expressing the views of the opposition to the British government's American policies. The rebus or hieroglyphic letter was employed as a form of political satire.

Matthew Darly published the first of these two rebuses on May 6 and the other on May 11, 1778. Darly was a prolific engraver whose work ranged from architectural plans, engraved bookplates, portraits, and the plates engraved from Thomas Chippendale's drawings for the Gentleman and Cabinet-Maker's Director (1754) to Darly's Comic Prints of Characters, Caricatures, Macaronie's, etc., Dedicated to D. Garrick, esq. (1776). He published books and prints, sold wallpaper, and designed and printed political cartoons. Although his shop and workrooms in Cranbourne Alley, near Leicester Square in London, and his professional activities between 1754 and 1778 in London and Bath are well documented, the facts of his birth and death remain obscure. Darly was typical of the other 18th-century British creators and publishers of caricatures in his versatility, and he was superior to many of them in skill. His irreverent attitude to his country's institutions led him to sign a self-portrait, "M. Darly, P.O.A.G.B. (Painter of Ornaments to the Academy of Great Britain)."

Some copies of these rebuses were handcolored and others not, a practice common with prints of the period. In an advertisement in the Public Advertiser, May 1-3, 1778; Darly announced, "In a few days will be published Price 2s. illuminated, 1s. plain, a Heroglyphic [sic] Letter from Britannia to America. . . .” The Library of Congress copies of these two rebuses are here reproduced exactly, "America to Her Mistaken Mother” in color and "Britannia to America” in black and white.

This exchange of letters comments on the British attempt in that year to negotiate peace with the colonists. The overture was in response to well-founded rumors of a Franco-American alliance. In the initial stages of the Revolution, France had hinted that she might support American belligerency should the colonists declare their independence. By the spring of 1778, with the Declaration of Independence signed and the American victory at Saratoga complete, only the greatest concessions on the part of the British government could upset the French alliance and prevent the expansion of the war.

The British approach to peace was through a commission appointed by King George III. The five members were chosen with an eye toward appearing balanced and impartial. In addition to General Sir William Howe and his brother Admiral Lord Richard Howe, who held seats by virtue of their commands in America, the members included George Johnstone, one-time governor of West Florida and an outspoken proponent in Parliament of American rights; Frederick Howard, fifth Earl of Carlisle, a wealthy, young aristocrat known primarily to Americans as a close friend of the British opposition politician Charles James Fox; and William Eden, an enterprising bureaucrat and intimate of Lord North.

Favoring the prospects of the Carlisle Commission, as this body came to be known, was the willingness on the part of the King to concede to most of the early demands of the Americans. He was prepared to return to conditions as they existed in the Empire before 1763, conceding to the colonists the rights of voluntary contributions for imperial defense, freedom from taxation by Parliament, the popular election of governors and customs officials, and unqualified pardons. Even modifications of the declared legislative supremacy of Parliament might be considered in the negotiations. The only thing lacking insofar as the colonials were concerned was British recognition of their independence.

It was against this background that the two rebuses reproduced here were created. In "Britannia to America" we see the British attitude of extreme generosity to the Americans on the one hand and traditional antipathy toward the French on the other. Both the French alliance and independence were unpalatable to them. The colonial response, "America to her Mistaken Mother," reflects a lack of faith in the sincerity of British offers and a strong determination for independence. Published several weeks before the three commissioners from England joined the Howes in America, the rebus is prophetic of the colonists' refusal to meet with the commission.

Comment: While the background from the Library of Congress (above) refers only to Matthew, the citation for the artifact says Mary.  The print is signed “M Daly,” which is surely the perfect signature for a husband and wife that worked together in the same profession.

Here’s more on them from Wikipedia:

By 1756, the husband-and-wife team had print shops in Fleet Street and the Strand. Mary was the sole manager of the branch at "The Acorn, Ryders Court (Cranbourne Alley), Leicester Fields."[3] Mary advertised in the daily papers in her own name as "etcher and publisher."[3] She was one of the first professional caricaturists in England.[8]
The Darlys’ shops, some of the first to specialize in caricature, initially concentrated on political themes in the 1750s, at a time of political crises, but then focused on world of fashion. "They seem to have been shrewd business people, changing their output in response to the fashion of the day."[9] Their etchings and engravings included "Wigs" (12 October 1773), "The Preposterous Head Dress, or the Featherd Lady" (20 March 1776), "Phaetona or Modern Female Taste" (6 November 1776); "Miss Shuttle-Cock" (6 December 1776); and "Oh. Heigh. Oh. Or a View of the Back Settlements" (9 July 1776), a play on words that refers to Ohio Territory.
The Darlys also offered drawing lessons to upperclass men and women.
The Darlys relocated their shop from Fleet Street to the West End as the craze for homemade caricatures grew. At their West End shop, they published between 1771 and 1773 six sets of satirical "macaroni" prints, each set containing 24 portraits. The new Darly shop became known as "The Macaroni Print-Shop".  Matthew and Mary Darly fueled a rage for caricatures in London, flooding the market with prints on social life, such as those lampooning the so-called "macaronis."
During the 1770s, the Darlys sold a variety of prints at a wide range of prices and to customers from various social classes. Their prints included depictions of prostitutes, market vendors, maidservants, and other women of the age.

Mayflower Passengers and those who survived the first year - Infographic poster

These two prints are fantastic with great quality frames. The frame color compliments the prints so nicely. They were shipped ready to go! They are unique fun pieces to have in your home and I highly recommend them. 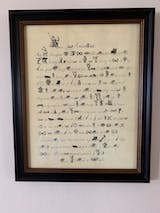