From the Printing Office of Edes & Gill in Boston. You can purchase the Declaration, described below, or the Declaration and the Constitution, which is also printed at Edes & Gill, at a savings of $5 for the pair.

Printed by hand on the Wooden Common Press printed in the Printing office of Edes & Gill located in the Clough House (c 1715) on the grounds of the Old North Church Historic Site in Boston.

The Printing Office is a non-profit 50(c)3 corporation funded entirely by donations, gifts, and the sale of materials printed on their historic press. A portion of the proceeds of this sale will go to them.

I forgot to attach the photo on my review, so here's my review with said photo.
The printing is just amazing, and looks stunning when properly framed and mounted.
You want to buy this. 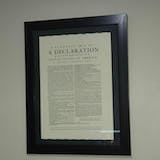