I love my bracelet. Not only for what it represents, but for the way it's made-especially "In the USA"! Now folks, it's time to make one with "2021" tea party on it. I'd buy it, both figuratively and literally! 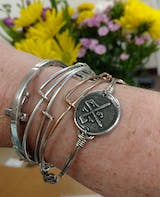