This is a smaller, commercially-printed version of an engraving done by John Binns. (You'll find the history below.) Because of the fine detail, including the text of the Declaration, at this smaller size it won't be possible to read all of the text or make out all of the details.  We also have a  fine art-grade print that is nearly as large the original.

It is perfect and has a spot of honor at our farm! 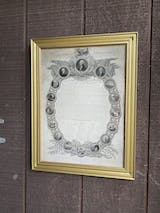