This sweatshirt is super comfy, truly soft and so fun! I’ve gotten a compliment on it every time I wear it. Runs ever so slightly small. I dozed up to a medium and couldn’t be happier! 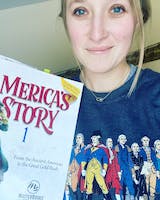 My son loved his sweatshirt. It was a hit at school as well. Thanks for making fun products promoting our rich history!