"The Victory blanket is great quality, beautifully designed, and as an added bonus, a great conversation piece!" - Amanda R.

"Love the Victory blanket! This blanket is great and made a perfect gift for a fellow history lover. Soft, warm, good size, and very attractive." - Jonathan M.

"I’ve had my blanket about a month now and use it every evening on the sofa while watching tv or reading. It the high quality that all History List products are and made in the USA. General Washington would approve, I’m sure." - Helen. K.

Our design precisely traces the stars on a surviving flag used at Washington’s headquarters. Woven in America.  And only available here.

Thanks to all the folks who ordered, we appreciate all the positive reviews you've shared.

Made in America from 100% combed, natural cotton. The design, with a perfect tracing of each individual star from Washington's headquarter's flag, is woven as part of the blanket; it's not simply printed on. And it's woven on a Jacquard loom, which makes this even more interesting.

Comes with a hang tag that includes a historical quote, background on the event, and a historical map. Thanks to Larisa, one of our Regional Editors, for suggesting using this design for the blanket.

This design is also available in a crewneck shirt for men and women, long-sleeved shirt, women's v-neck shirt, as well as a sticker.

Shipping: USPS standard shipping is $7.95. Add a t-shirt, cap, or book to this order and they ship at no additional cost.

We love this patriotic throw. Very well made.

A
A.
High quality blanket

This is a beautiful blanket. It feels like it should have cost twice as much, it's so high quality and well-made. And for its size, it somehow manages to be very lightweight, which is perfect because it can be used year-round instead of confined to the winter. Very pleased with the size, weight, craftsmanship, packaging, and service. 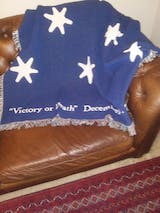