We also have the Boston broadside of the "Declaration of Independence," printed by Edes & Gill.

, as well as the Philadelphia broadside, printed by John Dunlap, and the Baltimore broadside printed by Mary Katherine Goddard.

I bough this piece twice. The original one I had hanging framed in my office my brother admired and I gave it to him as well as the bill of rights for the holidays as he is a second year law student. He was speechless and loved it. I have this copy hanging in my home next to a copy of the Declaration of Independence. I love the way they used the spelling and printing of the time and the paper as well. This is a beautiful piece and any history buff big or small should have this in their collection 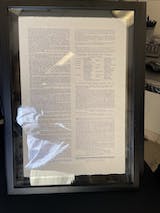 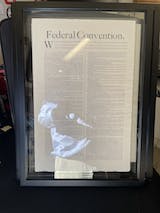