Updated July 2: We've had a great response—thank you—and are out of a few sizes.  We are going print more after the Fourth, so if the shirt you order is out of stock, we will ship it to you as soon as it's printed. Also, note that not all sizes are available in all colors. If you select a color/fabric and size above and see that the Quantity selection is grayed out, it means that we don't carry it in that size. —  Lee

You can also find this design on a static cling and notecards with envelope. 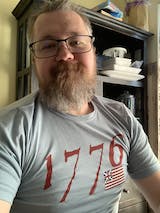 B
B.M.
We Hold these Truths Tee

I absolutely love my t-shirt!! It’s so soft and it’s go to shirt for the 4th of July! As a history teacher, I try to find t-shirts that deal with my subject area. I can’t wait to wear this one this year!!

I love this new patriotic, historic Rev War shirt - the fit, the design, the price all exceed expectations. Arrived quickly, too, just in time for our July 4th celebration. I also love the history tag that comes with each shirt, offering insight about the history of the design - bonus!

D
D.A.
Soft and so comfy

The blend is perfect, as it is soft yet maintains it's shape.