Also available, "We hold these truths - July 4, 1776" shirt available in white, light blue heather, and silver and on a long-sleeved shirt in white and light grey.

By the end of 1775, during the first year of the American Revolutionary War, the Second Continental Congress operated as a de facto war government authorizing the creation of an Army, a Navy and even a small Marine Corps. A new flag was needed to represent the Congress and fledgling nation, initially the United Colonies, with a banner distinct from the British Red Ensign flown from civilian and merchant vessels, the White Ensign of the British Royal Navy, and the British Union flags carried by the British Army's men on land. Individual states had been using their own independent flags with Massachusetts using the Taunton Flag and New York using the George Rex Flag prior to the adoption of the Grand Union Flag.

I wore this shirt on Independence Day as a proud historian l.

My item is well made, soft, great fit. Received it so quickly.

I got the 100% Cotton one ,It's really nice and comfortable. Not only does it show the actual flag the colonies as a whole use at that time before our official stars and strikes and But, the quoting of "We hold these truths......." Thus is such a reminder of who we are, where we stand and how we as a nation need to make sure we don't stray from the facts and revisionist historians who continue to adjust the Way we because a beacon of hope and how we as a nation began

Well made shirt, printing looks great and shipping was fast! 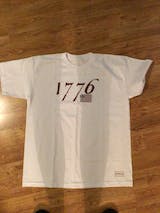 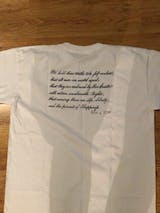 I've purchased several t-shirts from The History List and I love them all. Each shirt has been worn and washed many times and they still look new. I always get compliments and questions when I wear one and I'm more than happy to direct people to The History List website.

A
Amanda Y.
Love these shirts!

This is my second order from THL, I also have the 1773 shirt. Always good quality soft shirts and supports a great cause! Make History cool again y'all!!